DCist - By Staff in Food

Whether you like your ice cream pristine or mashed up with mix-ins, flavor is everything. We've looked before at our favorite ice cream makers, but we'll also stand in line for just one specific kind, never wavering from our preference despite how many tiny sample spoonfuls we try of other flavors. And, yes, we've got FroYo on the list. Get over it. 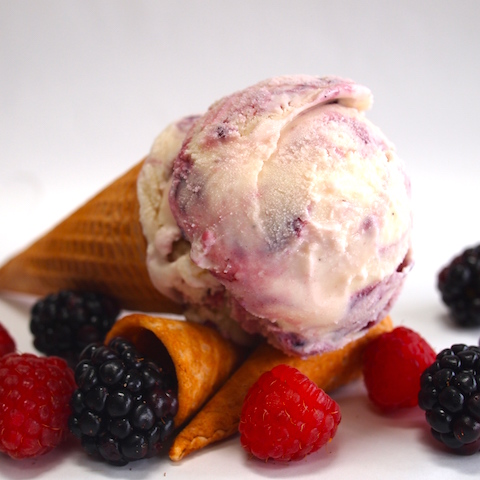 MARION BERRY AT ICE CREAM JUBILEE: It takes a fraction of a second for the impact to hit. Then comes the jubilee. "Being able to elicit an audible laugh is kind of rare and should be celebrated," said Ice Cream Jubilee owner Victoria Lai, whose mission is to induce happiness and foster a jubilee. "People laugh before they even taste it." The cheeky flavor, made with marionberries and graham cracker crumbs in a sweet cream base, is infused with a provocative dose of political history, the epitome of #thistown. At a time when partisans dispute facts, there can be no denying Ice Cream Jubilee won the City Paper's best ice cream shop in 2015 and 2016, and was then named by Thrillist as one of the best ice cream shops in the U.S. The Navy Yard ice cream hot spot just turned two years old (and has a birth certificate to prove it). — Andrea Adleman
Ice Cream Jubilee is located at 301 Water Street SE.

BLACK TEA GELATO AT PITANGO GELATO: Having spent the past decade tasting, studying, and critiquing tea, I'm impressed to detect authentic tea in the gelato. Thinking through what I'd write about a flavor I've eaten countless times, I'd comment on the distinct essence of tea prepared English style, with condensed milk that imparts natural sweetness without extra sugar. I'd note the tannic maltiness, a telltale sign the tea is Indian or Sri Lankan. I'd heap praise on a flavor irresistibly crafted to taste like a classic cuppa. I script my words without knowing if the flavor is offered in this week's rotation. It is. Even if not, the notes are affixed to the tip of my tongue. Out of curiosity, I visit the company website to see if a description of the flavor is posted. It says what I just said. "Ceylon black tea, with its crisp, citrus-like aroma, makes a gelato reminiscent of wonderful English-style sweet milk tea ...." It's possibly the first time I've ever marched in lock step with marketing copy. I unapologetically endorse this message. — Andrea Adleman
Pitango is located at 413 7th Street NW and 660 Pennsylvania Avenue SE.

ORIGINAL TANGY AT MR. YOGATO: Ice cream is as much about the experience as it is the flavor. The fun factor ups the flavor factor like nothing else—which is why the fro-yo at Mr. Yogato is my fave. I order a big cup of the Original Tangy—not too sweet, but with a bit of a kick. When it comes to toppings, I always go crazy, because why not? Since it’s not measured by weight, I toss on a few types of cereal, fresh fruit to feel extra-healthy, douse it in sprinkles because rainbows make everything better, and then add a bit of the funky red bean paste to be extra-eclectic. And if I’m feeling like a need for a cheap date, then I order like a pirate and answer arcana about world geography for a discount. Hint: the discounts get deeper if you load up on Seinfeld trivia before you go. — Evan Caplan
Mr. Yogato is located at 1515 17th Street NW.

CHAMPAGNE MANGO SORBETTO AT DOLCEZZA: There are so many excellent gelato options to choose from at Dolcezza (hello Hair Bender Espresso and Salted Caramel), but today I'm going to sing the praises of their sorbetto, quite specifically the Champagne Mango. It is one thing to make rich gelato with, ahem, milk and cream, but it's a miracle of ice cream science to get this kind of consistency with fruit and water and whatever potions they put in there. And champagne mangoes aren't just any old mangoes—they're sweeter and more delicate, an inspired choice to enliven what is normally a second-rate option for the dairy intolerant. — Rachel Sadon
Dolcezza has multiple locations in D.C., Maryland, and Virginia. 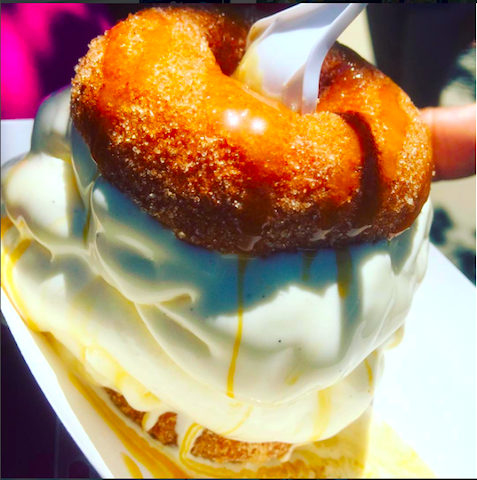 Follow the Goodies Frozen Custard truck to get your hands on apple cinnamon doughnuts stuffed with vanilla frozen custard. (Photo via Instagram: @mmmgoodies)

VANILLA FROZEN CUSTARD AT GOODIES: What’s not to like about the Goodies ice cream truck? It’s like the 1950s the way it is in our imaginations, all pastel colors and crisp uniforms and R&B music on the loudspeaker that makes you dance across the sidewalk, dollar bills in hand. Keep it simple with the vanilla frozen custard, which is so luscious that, honestly, I want to bathe in it. It’s creamy, it’s indulgent, and, if you have it sandwiched inside an apple cinnamon donut, your life will just never be the same again. There’s a reason why their theme song is “Fatter by the minute” and we don't care. — Kristen Hartke

WALNUT ICE CREAM AT ZAYTINYA: Saving room for dessert is the first challenge of enjoying Zaytinya's housemade richly earthy walnut ice cream. It's a signature component of the Turkish delight dessert along with yogurt mousse, honey gelée, orange caramel sauce, and pine nuts. It can also be ordered by the scoop or as part of an ice-cream trio. — Travis Mitchell

GUINNESS ICE CREAM AT YORK CASTLE ICE CREAM: I know, I know, you never go to Rockville. Neither do I, but sometimes it’s worth getting a Zipcar just for the purpose of loading up on Caribbean-inspired ice cream at York Castle. You’ll find many interesting fruit-forward flavors, including soursop, lucuma, and tamarind, but the Guinness is my go-to. It has an unabashedly strong Guinness flavor, creamy, rich, and slightly bitter, and, unsurprisingly, it’s pretty delicious when used in an ice cream float — just get a quart, or maybe a gallon, handpacked to take home.— Kristen Hartke

COCONUT GELATO AT PITANGO GELATO: I've been known to go into Pitango for a latte (their coffee is just as good as any specialty cafe) in the middle of winter and walk out with a frozen treat instead because coconut gelato appeared on the rotating menu that day. This is the platonic ideal of coconut ice cream — dense, creamy, and as far from cloying as you can get. The company is committed to using high quality, fresh ingredients, and you can taste it. — Rachel Sadon

AVOCADO & CHOCOLATE ICE CREAM AT MILK CULT: When he lived in Indonesia, Milk Cult co-founder Ed Cornell was treated to the joys of avocado desserts. Back stateside, he introduced Washingtonians to this distinct pleasure by way of avocado and chocolate ice cream. Suspend disbelief long enough to imagine that the fruit associated with guacamole can serve as dessert. Milk Cult's successful formula allows the earthiness of avocado to shine through. Bitter cacao nibs dot the grassy base. The flavor is available at specialty grocers by the pint. At special events, Milk Cult sometimes offers its pure avocado flavor. This is where the raw soul of avocado most impresses. Unadorned, the wholesome fat of the avocado cushions the mouth with the sensory comforts of a perfectly ripe slice. The creamy flavor departs with pronounced herbaceousness. When Milk Cult is serving at events, keep an eye out for the avocado ice cream on sugar-toasted Japanese milk bread with Indonesian vermicelli, Cornell's version of a Singaporean street cart dessert called Loti. — Andrea Adleman

HONEY LAVENDER AT MOORENKO’S: Okay, I had a hard time choosing just one flavor of Moorenko’s ice cream, because the Pumpkin, Ginger, and Wild Blueberry flavors are all spectacular, but the Honey Lavender perfectly captures the flavor of late spring and early summer, with the sweet earthiness of honey combined with lightly floral notes of lavender. If you’ve ever cooked with lavender, then you know that it takes practice to infuse the highly-perfumed flavor without going overboard and creating something that ends up tasting like soap. Moorenko’s owner Susan Soorenko clearly has the magic touch. When winter drags on like it did this year, that Honey Lavender flavor promises better days ahead. — Kristen Hartke

Moorenko’s Café is located at 8030-B Georgia Avenue, Silver Spring, and the ice cream can be found in the freezer section at grocery stores across the area.

SAFFRON PISTACHIO AT DOLCI GELATI: Docli Gelati's Gianluigi Dellaccio is Washington's resident gelato maestro. His saffron pistachio and candied lemon peel flavor recently won the jury's prize at the 2016 Gelato World Tour in Chicago. The subtle flavor mixes elements of tart, sweet and nutty. It's not the loudest flavor out there but it's balanced, refreshing, and won't last long in the summer heat. — Travis Mitchell

Dolci Gelati has multiple locations in D.C., Maryland, and Virginia, plus a truck.