(Indique) Indique gets a next-generation makeover 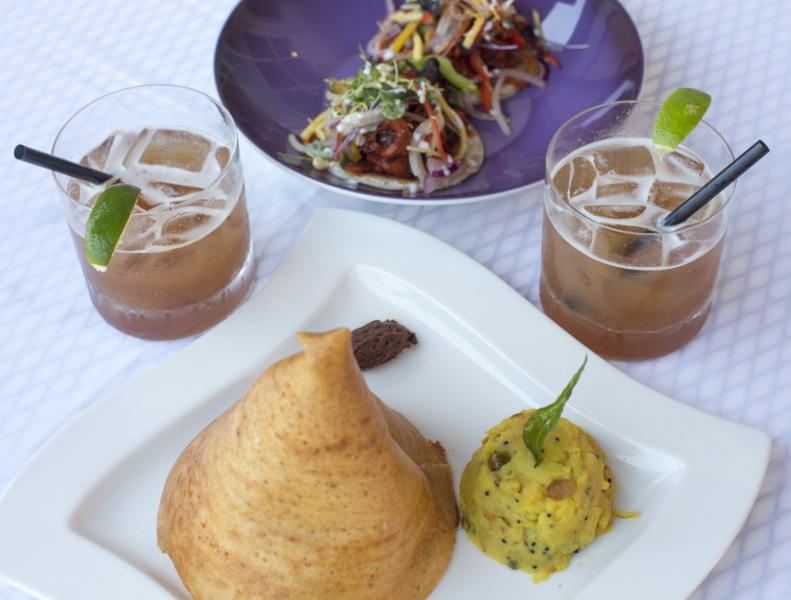 The 20-something sons of the owners of Indique in Cleveland Park left their jobs in New York last year to develop a fast-casual restaurant in the District. Yet to open, Rasa represents a merger of their names: Rahul Vinod, a former investment banker, and Sahil Rahman, a onetime consultant. A byproduct of their time in Washington, where they’re learning the restaurant ropes at Indique, has been the sons’ push to update their fathers’ two-story, 14-year-old establishment. The dads, executive chef K.N. Vinod and business partner Surfy Rahman, listened — and customers are the big beneficiaries.

In May, Indique emerged from a design refresh that finds brighter dining rooms and more murals on the walls. In July, the restaurant launched a weekend brunch service that showcases Indian street food. For $20, diners can compose a meal from among two dozen small plates; “unlimited” suggests you could try them all, should you be so inclined. Pickled chicken, sliced purple onion and red bell pepper are mounded on a round of flaky, whole-wheat paratha: an Indian taco designed for fire-eaters thanks to red chilies in the seasoning. More delicacy comes by way of the sweet potato chaat, three orange scoops of roasted mashed tuber, bright with lemon juice and coriander, presented on a banana leaf.

The most dramatic eye-opener is a miniature dosa. The crepe, made from lentils and rice and shaped into a cone, rises high on a plate that includes coconut two ways (as a chutney and sambal) and potatoes threaded with curry leaves and mustard seeds.

Dinner is also worthy of a toast. Vinod has expanded the evening menu to include street snacks, only some of which carry over from brunch, and a few dishes from his native Kerala, in south India. Cauliflower dipped in a batter of corn flour and egg, then fried to a glassy crackle, pulses with heat from green chilies. Braised pork belly reverberates with warm spices, the meat’s vinegar sting tamed with jaggery, unrefined dark sugar. A category called “From My Hometown” stars a fish curry: cod in a cloak of what looks like lava and smacks of ginger, curry leaf and tart Malabar tamarind. To eat the vivid dish is to be reminded that Kerala is known by its people as “God’s own country.”

The owners’ sons have infused Indique with fresh energy and made their fathers happy. Originally, “we had no clue they would continue” at the longtime restaurant, says the elder Vinod. Although he and his partner have no plans to step away anytime soon, the chef says, “this is the passing of a baton.”

The brunch cocktails are as inspired as the cooking. One tamarind margarita is likely to result in two.