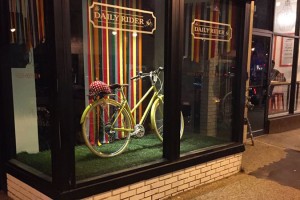 A bicycle shop on the H Street corridor is set to park itself in a new location about a half-mile down the road from its current home next year, one of its owners said today.

The business has outgrown the roughly 1,300 square feet it has leased since 2012, he said. The Daily Rider will get almost double the space it has now in its new spot in The Apollo building, which also will have a Whole Foods Market and a Wydown coffee shop.

“That decision [to move] is based largely on the fact that we have grown considerably,” Copsey said.

The Daily Rider sells and repairs bikes for casual riders, commuters, athletes, children and cyclists with cargo to carry. Copsey said he is looking to have more bicycles for sale in his new shop. He also plans to carry clothing and put on more events there.

In the meantime, cyclists can continue to visit the 1108 H St. shop, which isn’t expected to close before the new store opens, Copsey said.