By Erica Brosnan - The Washington Times 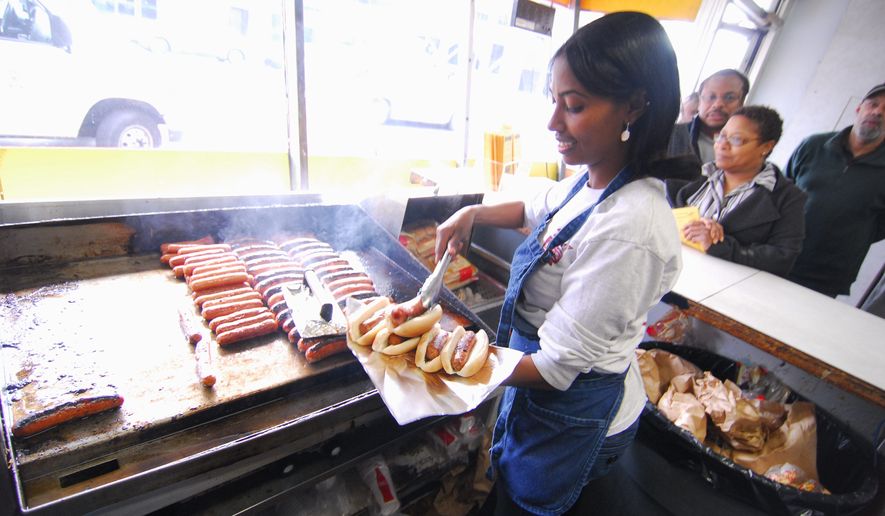 It’s not just a local culinary mainstay in a transient, cosmopolitan town, not just a humble, versatile delicacy whose appeal — served plain or smothered in chili — embraces all classes, races and political persuasions, not just the undisputed signature dish of Washington, D.C.

For Bernard Demczuk, the half-smoke is a “spiritual awakening.”

As the historian of Ben’s Chili Bowl, the U Street NW down-home dining mecca, Mr. Demczuk has seen innumerable spiritual epiphanies as locals, tourists, foodies and celebrities — including President Obama — have come to know and appreciate the half-smoke’s charms over the decades.

As a staple of Washington-area picnics and area street vendors, the half-smoke can be expected at most barbecues around the area yet again this Fourth of July. But what is a half-smoke, and why do so many here flock to them? It turns out there’s a fair bit of mystery — and some controversy — behind the District’s favorite dog.

According to Eric Mittenthal, president of the D.C.-based National Hot Dog and Sausage Council, the half-smoke is a “half-hot dog, half-sausage.”

Most assume the name stems from the fact that the classic half-smoke is a variable blending of pork and beef, but there are also all-beef half-smokes sold throughout the area. Some say the name derives from the fact that many restaurants and vendors served the smoked, spicy dog split in half down the top. Then there’s the school that argues the “half” comes from the fact that its texture is halfway between a smoked sausage and a regular hot dog.

Since Raymond Briggs of the District’s Briggs and Co. meatpackers, widely believed to be original distributor of the half-smoke, sold his company sometime near 1950 without clarifying things, it’ll always remains unclear. One thing Mr. Mittenthal was certain about, however, is that “D.C. is the home of the half-smoke, and locals have made it what it is today.”

According to a study conducted by the National Hot Dog and Sausage Council, Americans consume roughly 20 billion hot dogs a year. That translates to about 70 hot dogs per person. Taking into account Washington’s estimated population of 670,000, that’s roughly 46.9 million hot dogs in the District alone.

On Fourth of July, Americans are expected to consume 150 million hot dogs, which is enough to stretch from Washington  to Los Angeles more than five times according to the NHDSC. In the District, those hot dogs will most likely be half-smokes.

The basic hot dog seems to bring out the regional creativity in American cooks, with many cities and regions having a pronounced preference for their local variation on the basic theme.

On the East Coast, there is the Jersey breakfast dog served with eggs. In Maine, the locals order up red snapper hot dogs, which are stuffed into bright red casings. In Alaska, reindeer dogs are preferred among locals; Philadelphians tout the “Philly combo,” an all-beef hot dog with a potato-and-fish cake; while many Southerners swear by the slaw dog.

In the 1960s, Chinese immigrants began wrapping them like dumplings, and in Arizona they combined French baguettes with Mexican flavors to make a Sonoran dog. Meanwhile, the “danger dog,” a hot dog that has been wrapped in bacon and deep fried, has been gaining popularity in a number of cities.

While Ben’s may be the most well known half-smoke house, it’s not exclusive. In fact, Arlington’s Weenie Beenie Sandwich Shop, founded in 1950, had the dish on its menu eight years before Ben’s Chili Bowl even opened. The murky origins of the half-smoke start here, as the dish’s pioneers were not anxious to share their secrets, according to Nate Anda, head butcher at the local Red Apron group of meat shops.

“The problem,” Mr. Anda told a BBC interviewer last year, “is that Ben’s and Weenie Beenie, which everyone looks to as the standard of the half-smoke, have never revealed their recipes. As a result, chefs have interpreted the half-smoke in their own way.”

The Washingtonian dish is offered by many local street vendors, but more ambitious eateries such as Churchkey, Boundary Stone, Red Apron, Bold Bite and the Straw, Stick and Brick Delicatessen have all found a way to put their own spin on the dish. (There’s even a proposed Half Smoke Restaurant expected to open soon in the increasingly trendy Shaw neighborhood.)

Boundary Stone, located right by Howard University, is mostly known for its selection of tap beers but also serves half-smokes smothered in chili and cheese, and recommends washing them down with one of their 105 different varieties of whiskey.

Bold Bite has the market cornered on a Mexican-style half-smoke. Located inside Union Station, the hot dog eatery offers customers the option of topping their half-smokes with south-of-the-border flavors like guacamole, pico de gallo and cilantro lime sauce.

For many, however, Ben’s Chili Bowl remains the city’s central shrine to the half-smoke.

“People come here from all walks of life,” said Virginia Ali, who founded the eatery with her late husband, recalling how she met a family visiting from Singapore recently.

Originally a silent movie theater and later a pool hall, Ben’s Chili Bowl was renovated in 1958 by Ben Ali and his wife Virginia, and was “very unique for its time,” explained Mrs. Ali. “There were lots of hamburger places, but none really for hot dogs, so we decided to try our hand at that.”

From its founding, half-smokes were included on the menu, but according to the Ali family, they weren’t nearly as popular as the chili hot dogs were. Today, the half-smoke is the top seller on the menu at all nine of the restaurant’s chains, and the original U Street location is considered a local landmark.

“People come to Washington, D.C., they see the White House, the Washington Monument, and then they go to Ben‘s,”Mr. Demczuk said.

The half-smoke meat is specially packaged exclusively for Ben’s Chili Bowl at Manger Packing Corp. — based, somewhat ironically, in Baltimore — and is encased in an ultrathin, natural casing that is stuffed with finely ground meat that’s been mixed with a blend of spices.

When a customer orders one, they’re cooked using a 325-degree grill, which is reserved solely for the half-smokes, for 15 to 18 minutes.

“Half-smokes and all types of hot dogs are a comfort food,” Mrs. Ali said. “They just make people feel happy and feel at home.”